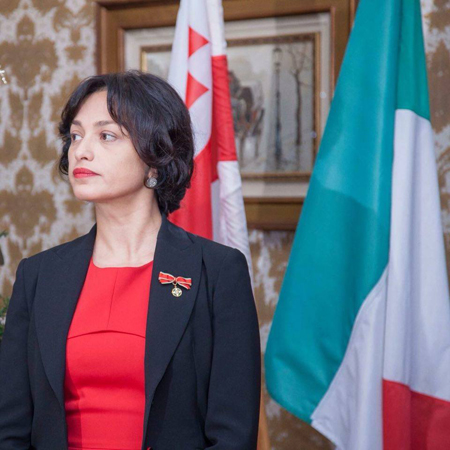 The formal decision to award Surguladze with the prestigious honour was approved by Italy’s President Sergio Mattarella and aimed to highlight the singer’s contribution to friendship and cooperation between Italy and Georgia.

The Order of the Star of Italy was founded as a national order by the first President of the Italian Republic, Enrico De Nicola, in 1947, to recognize civilian and military expatriates or foreigners who made an outstanding contribution to the reconstruction of Italy after World War II. However the prize was reconstituted in 2011 as the Order of the Star of Italy and was presented to individuals for their contribution to friendship between Italy and other countries.

Surguladze spent a significant part of her ongoing career in Italy, where she received a scholarship at the academy of the famous Teatro alla Scala in Milan and twice was selected to perform in opening shows for the theatre’s seasons.

Surguladze was also a recipient of Georgia’s 2010 Presidential Order of Excellence. She received the Order after her performance in a unique television production of the opera Rigoletto in Mantua in Italy.

This site uses Akismet to reduce spam. Learn how your comment data is processed.