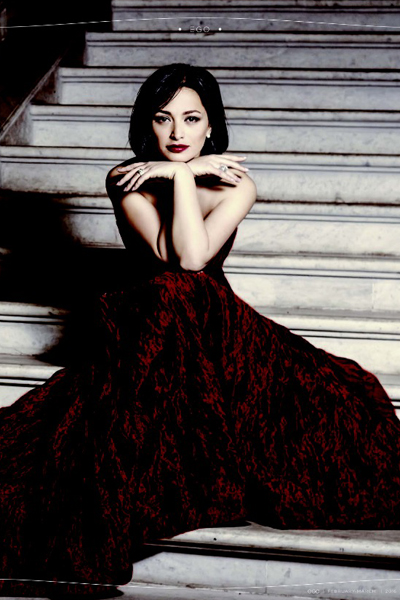 She made an appointment to record the interview in her house. As she later mentioned in our conversation, that is the place where tired from daily overloaded schedule she gets the luxury of retiring in solitude. In this house, I was her only spectator and listener, a listener who expected her to play one role and one role only, without any mastery of acting – in front of me sat the makeup-less and a little tired, the true Nino Surguladze. My respondent is in an age, when people accept life without beautifying it

EGO: How did your first contact with music occur?

My father had an immense influence on me in this regard. He would often offer me to listen to his favourite musicians – Beniamino Gigli and Mario Lanza. My first ever role was awarded to me in the A. Virsaladze Art School. At the time, performing on the stage of Philharmonic was considered a great achievement. I remember, each of my performances was accompanied with huge joy and the more spectators I had the happier I was.

EGO: Do you think that in art the major problem is the deficit of sincerity?

I think that not only in music, but generally, in life, the lack of sincerity is a problem and first and foremost towards your own self. An insincere person on a stage could never be successful. A stage is a place where radiography happens and the spectators see everything.
If the sound is not being born through sincere emotions, you cannot touch the strings in the hearts of the spectators.

EGO: If you didn’t have a singer’s talent, you would be…

I have never thought about it, but I wouldn’t refuse to in movie industry. A movie is a huge emotion built around the tiniest of nuances.

EGO: Not long ago, on the 2016 EGO Magazine award ceremony people nominated you the powerful and tasteful woman of the year. What do you think, do people love strong women in Georgia?

I couldn’t say how much the strong women are loved, however, they certainly are respected.

EGO: Low quality music is like Indian TV series, everybody badmouths it, but they still listen. What do you think is the reason behind it? We have not yet managed to refine our taste or the widespread opinions of the public scare us?

I think tasteless music also has a right to exist. However, I still think that eventually the musical taste should be refined and for this to happen, there should exist constructive criticism. By the way, there is a character in the animated film Ratatouille called Ego, who is a food critic. Everybody is afraid of him, because his competent opinion changes a lot of things. Ego is an expert and we are definitely in need of such Egos.

EGO: How do you perceive the notion – a free Person?

It doesn’t mean you can do whatever idea crosses your mind. On the contrary, it entails an enormous responsibility. In a way, it is a frame as well, where you are to never cross the boundaries of other people’s freedom. And upon all, freedom is a fight against one’s own self.

EGO: Lately, discussing sex and religion have become quite topical. Why do you think that is?

Is it because we Georgians are competent in both or on the contrary, we are facing deficit? Today they openly discuss these issues in Georgia, because the period that Europe went through several decades ago, has just arrived to Georgia. It is a wave, bound to just pass at some point. As far as religion is concerned, it has always been a topic of discussion in Georgia.

EGO: How does faith differ from religion? Or do you consider them to be identical?

I think without religion people exist, however, without faith it is hard to exist.

EGO: Upon meeting God, what would you have sung to him?

During a deafening applause, a singer bows to the audience. These minutes of happiness areconsidered by many to be attained only through their efforts and tend to often forget that it is gift of god. If I ever met god, I would have sung Ave Maria to him.

EGO: Are all means approved for achieving success?

Each person has their own measures as to what is permissible, however, as they say, the winners are then never judged. For me, it is important that a person leads their life, so as to not lose respect to themselves.

EGO: Does being a celebrity mean being successful?

Certainly not. Being famous in no way means being successful, however, being popular in life helps you make the following moves.

EGO: If we take a look at the recent history of Georgia, what are the things that make the citizen, Nino Surguladze, the most proud and the most ashamed?

I am ashamed of the period when Georgians were informing on each other. I don’t want the year 1937 of the past century to ever make a comeback. And I was the most proud, when I saw Georgians come out and extend a helping hand to those in need as a result of the 2015 flooding. I still believe that the darkness will never catch up with the light.

EGO: Do you have any ritual for before going up on a stage?

I cross myself and go out on the stage as if it were the last of my performances.

In front of a mirror, facing yourself, what would you have told yourself?

Nino, take a break at least from time to time…

This site uses Akismet to reduce spam. Learn how your comment data is processed.